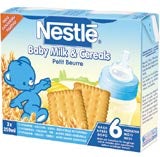 Nestlé is courting controversy with plans to launch its Nan HA hypo-allergenic baby milk in the UK. The product is sold in various European markets, but has not yet made a UK appearance.

A Nestlé spokeswoman says some Nan HA has been supplied to consumers who have specifically requested it, but that Nestlé has decided to make the product available through independent pharmacies.

The move has been attacked by Baby Milk Action, which has been leading the long-running Nestlé boycott over the marketing of baby-milk products in the Third World.

Patti Rundall OBE, policy director of Baby Milk Action, says: “I’m against any health claims on any breast milk substitutes. The EU should not allow this product to be sold.”

Rundall also attacked a Nestlé donation of Sfr3m (&£1.3m) to the International Federation of Red Cross and Red Crescent Societies’ anti-AIDS educational programme, Africa Health Initiative 2010 as “a cynical attempt on Nestlé’s part” to buy goodwill and to market its baby-milk products.

With reference to Hilary Rogers’ letter (MW June 6), I too believe there to be a great deal of truth in the comments that a Scottish accent is very soothing to the ear and creates an atmosphere of trust and attention. Just look at the recent growth in call centre business in Scotland however, to […]

Ever wondered what’s in dog food? Perhaps, like the Diary, you thought it wiser not to ask. If you are curious (perhaps you’re a cat), now’s your chance to find out. Masterfoods, which brought you Snickers, is running “canine cookery” courses to promote its Pal dog food (available in “dry” and “moist” formats, press release […]

I’d like to respond to Hilary Rogers’ letter “Trust me, I’m a Scotsman” (MW June 6). I’m fed up with Scots knocking everything English, particularly when we have a successful call centre here full of Mancunian accents. Firstly, Geordie or Mancunian accents, or any other Northern accent for that matter, are not a fad or […]