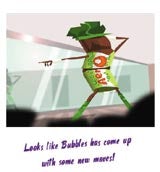 Nestlé Rowntree is boosting the Aero brand with the launch of an indulgent variant, Aero Chocolate Truffle, later this year. It will be supported with part of Aero’s &£6m marketing investment for 2005.

It is understood that Nestlé hopes to develop Aero as a “master brand”, along the same lines as Kit Kat. The strategy will be supported by a revamp of the packaging and recipe and the launch of a bite-size version of the brand, Aero Bubbles, and two new flavour variants, Irish cream and sticky toffee. The company launched a low-carbohydrate version last year.

Industry insiders say that the truffle variant is designed to give the Aero range a more premium and indulgent feel. The bar will launch in July or August and will be supported by television advertising.

Nestlé says that chocolate truffle is one of several flavours it is considering for Aero. A spokeswoman adds that it already considers Aero, whose sales are worth &£75m, to be a master brand and that launches such as Aero Bubbles serve to consolidate that position.

The Aero extensions are one of a number of new products planned for 2005. Nestlé is also launching three limited-edition bars under the Willy Wonka brand, to tie in with the launch of the new Charlie &amp; the Chocolate Factory film, which is to be released this summer. It is also launching two new variants under the Kit Kat Editions brand.

The National Society for the Prevention of Cruelty to Children is thought to be talking to media planning and buying agencies about its £5.57m business. The account is handled by Zenith Optimedia.

Leith Advertising has created an anti-cocaine television ad for Scotland, which will also run in cinemas. The ad focuses on the fact that users are 24 times more likely to suffer a heart attack.

Patex is believed to have shortlisted FCB/London, Saatchi & Saatchi and Vallance Carruthers Coleman Priest for its advertising business.