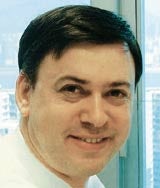 Rennie will replace Ducray, who left the confectionery giant at the end of last week, in August. Nestlé says Ducray has relocated and will remain with the company, but it is not clear in what capacity.

It is understood that Rennie is joining Nestlé directly from P&G, where he was most recently a senior marketer in the homecare business unit in Geneva.

Ducray was Andrew Harrison’s replacement when Harrison left to join MÃÂ¼ller Dairy as managing director. Harrison left that role without a job to go to late last month (MW June 23).

Ducray joined Nestlé from advertising agency TBWA/Hong Kong, where he was managing director and marketing planning consultant, last July. He had also held a number of senior client roles, including that of regional marketing director for the Asia-Pacific region at Wendy’s Hamburgers.

Harrison’s departure from Nestlé coincided with the arrival of managing director Chris White, who had been charged with turning around declining sales. White made a flamboyant start to his new role, slating the company’s marketing strategy and claiming that the business had “lost it focus” (MW February 12, 2004).