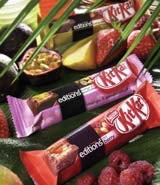 Nestlé Rowntree is understood to be relaunching its premium Kit Kat extension, Kit Kat Editions, just 18 months after its launch, after disappointing sales.

The revamp, which is due for the first quarter of 2006, will include scaling back the range to just two flavours – golden caramel and tiramisu – from four and revamping its packaging to reinforce its premium positioning and distinguish it from the core Kit Kat range.

Nestlé is expected to support the relaunch with consumer advertising, although it is not clear if it will include television support.

Kit Kat Editions was launched by former Nestlé managing director Chris White, who was brought in to turn around the fortunes of the Nestlé portfolio and the Kit Kat brand in particular. The new single-finger bar was launched as part of a significant reinvestment in the brand and was the first new launch under White (MW February 12, 2005).

Industry insiders say sales of the range have been poor, as the bar has failed to strike a chord with UK consumers with flavours such as mango and passion fruit.

One insider adds that Editions’ poor performance is in line with the overall Kit Kat brand, which is still suffering from falling sales. She adds that according to Nielsen figures, the four-finger Kit Kat has slipped to eighth place in the top ten selling chocolate bars.