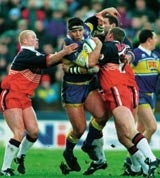 NestlÃ© Rowntree and Castlemaine XXXX have become the first sponsors of the Rugby Football League.

The RFL will be announcing a third partner – a high street and online bookmaker – later this month. All three deals will run for two years and are thought to be worth several million pounds in total.

NestlÃ© will use the sponsorship to promote its Lion bar, with the tagline “Lion – can you tackle one?” Starting next year, Rugby League logos will feature on millions of specially designed packs.

The partners will also benefit from pitch-side branding at all major league and cup games from the end of July and feature on the official Super League website, which has recently set up an online shop facility for selling Great Britain and Super League merchandise.

The deals are the first of their kind for the RFL, which last year negotiated contract renewals with both Sky Sports and the BBC that have seen up to 40 per cent increases in viewing figures for games screened this season.

NestlÃ© was involved in Rugby League three years ago when Lion bar branding appeared on the Great Britain team’s shirts.

Richard Allen, confectionery brand manager at NestlÃ©, says: “What we like about Rugby League is that it’s clearly an accessible sport that is attractive to family members of all ages and very much to our target consumers.”