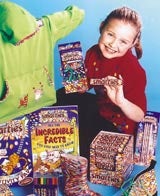 NestlÃ© Rowntree is extending its popular children’s brand Smarties with the launch of a chocolate bar, backed by a £1m-plus marketing campaign including television advertising. This is understood to be the 65-year-old brand’s first foray into the block chocolate format.

An insider says: “NestlÃ© has high hopes for the bar. It sees Smarties as one of its key brands that it can build on.”

Over the past 12 months NestlÃ© has embarked on a raft of marketing and new product developments for Smarties. According to AC Nielsen it has spent about £1.3m advertising the brand.

In March NestlÃ© launched Smarties in a can format, as a permanent packaging concept to accompany its tube. It also moved into the cake market last November, through its licence with Hazelwood Foods, which made the Smarties cake.

In Germany the brand has been extended into the cookies market, but there are no plans at present to launch the product in the UK.