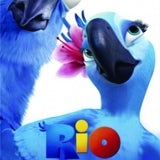 The boxes, which are to be available in 53 countries, have been designed to push animated film, Rio. The interactive video game, combines augmented reality with 3D animation and features the film’s titular blue bird character.

Players will be able cut a tag from the back of the cereal box to interact with the character by using a computer with a webcam, internet connection and an online augmented reality application.

The user can then lead Rio to a big bowl of cereal on screen using the marker from the back of the cereal box.

Patrick Schoellhammer, promotions director for Cereal Partners Worldwide, explains that due to the success of the campaign in France “it was the right next step to run a programme internationally”.