The clock is ticking for Nestlé Rowntree managing director Chris White. He has six months to deliver on his pledge to turn around the performance of the company, getting its brands back into growth and nudging up its share of the £3.6bn confectionery market towards 20 per cent.

On taking the reins at the maker of Aero, Kit Kat, Quality Street and Smarties in February 2004, the former head of Nestlé’s ice-cream division in Oceania said the company had “lost focus” and was “in crisis”. He blamed this parlous state on the previous brand and advertising strategy of marketing director Andrew Harrison, who left to join MÃÂ¼ller after White beat him to the top job, and said it would take two years to re-invigorate the business.

Everyone seems to have their own opinion about White’s success so far, and the views are often laudatory, sometimes critical. But last week the company’s marketing strategy was put under the spotlight yet again by news that marketing director Neil Ducray had left his post after only a year (MW last week). He was appointed by White as Harrison’s replacement last summer.

White has replaced Ducray with Procter &amp; Gamble homecare marketer David Rennie, who will start next month. The reasons behind Ducray’s departure are unclear, but he will remain with Nestlé until August, when he will move to an unknown job.

Some believe White has faced a tough job managing Nestlé’s brands in the UK, given that market leader Cadbury has been consolidating its position. It has brought together sub-brands under the Cadbury Dairy Milk name, enabling it to focus its marketing fire power. As one source says: “Cadbury has a coherent brand strategy for the first time in years. It has always tried to find a strategy that ties together its chocolate experience and helps to manage all of its brands. It is a more sophisticated marketing company than some people think, certainly more so than Nestlé.”

Meanwhile, Nestlé’s recent innovations have struggled, though it has had success with brand extensions to the Kit Kat range, particularly Kit Kat Editions. One of White’s moves was to axe Nestlé’s brand-led advertising strategy and drop Kit Kat’s “Have a Break” strapline in order to concentrate on tactical and product ads. In February he consolidated all of Nestlé’s advertisBaci, Double Cream, Milky Bar and Quality Street from Lowe.

Nestlé claims that its performance has improved markedly over the past 18 months, and Nielsen figures show its value share of the core confectionery market (excluding gifting) has risen to 16.7 per cent in the two months to mid-June this year, compared with 15.8 per cent in the fourth quarter of 2003. In a market worth about £3.6bn, according to figures from TNS, this pushes Nestlé sales up about £30m to £600m a year. The Nielsen figures also show Kit Kat’s market share rising to four per cent in June from 3.8 per cent in 2003. White was unavailable for comment, but a Nestlé spokeswoman says: “The positive sales uplift at Nestlé is the result of a team effort.”

KIT KAT GETS THE CREAM

This improved picture spurred stockbrokers Morgan Stanley to recommend in December last year that investors sell Cadbury shares in favour of Nestlé. The broker carried out consumer research through MORI, which showed the Cadbury’s Dairy Milk brand had the highest affinity and loyalty in the UK, but Nestlé has been able to increase awareness and trial for Kit Kat brand extensions. The survey, carried out in October, showed more people bought Kit Kat (47 per cent) than Dairy Milk (40 per cent), which the broker said heralded a turnaround in Nestlé’s market-share losses.

Against this positive view, some in the retail trade criticised Nestlé for concentrating on selling via supermarkets and ignoring the all-important impulse sector. One retail source says that this strategy comes from senior management rather than from the field sales people: “Nestlé’s innovations are good at times, but it seems to have a problem making them work. It doesn’t support new products with sufficient marketing following their launch, and fails to develop products in store with retailers.” 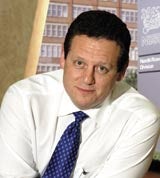 Our source points to Double Cream, which was launched under Harrison, but revamped by White early in 2004: “It spent millions of pounds on the launch and advertising, but it was a disaster.” In March, Marketing Week reported on Nestlé’s revamp of Double Cream as a niche brand, suggesting that it has given up on plans to make the product into a major countline (MW March 3).

Equally, the launch of Aero Bubbles was hampered by a failure to produce enough stock and Nestlé had to pull the launch across the impulse sector, rolling it out only in the multiples instead.

So has White made much difference to the relationship with the retail sector? The source believes he hasn’t: “I have seen no evidence of a change at Nestlé. It needs to make radical changes to the way that it deals with retailers by building proper relationships. It should also make some bold changes to its brand strategy.”

Some feel Cadbury is now so strong that no one can challenge its dominance. Tellingly, its policy of building in-store relationships with retailers has helped to achieve success for its launches.

An advertising source thinks White was demonised by advertising agencies because of some of the things he said about advertising for Nestlé brands in the trade press. “Nestlé’s advertising had become self-indulgent and White blamed Harrison for that,” says the source.

He adds that White is “quite a formidable operator” who would like to go on to run a larger part of Nestlé somewhere in Asia. “He is restlessly ambitious and the UK is just a stepping stone to something bigger. He is seen as a star at Nestlé and his career has been carefully managed both by him and Nestlé’s head office.”

Another observer adds that the cosmopolitan White and Ducray have seemed somewhat out of place at the Nestlé offices in York. For White, the UK confectionery market is proving a tough test, though judging by Nielsen’s market share figures, it seems to be a test he will pass.

Masterfoods regional media manager for UK and Ireland Paul Smith is leaving his position. It is believed that he will remain with the Mars-owned company, although it is not known what position he will take on. A replacement is thought to have been appointed and will report to European media manager Julie Steward. Masterfoods spends […]

Marketers are being warned they need to take swift action to protect their brand names online, as the launch of a range of new internet domain names approaches, in particular the .eu suffix. Jonathan Robinson, business development director at internet name registration company NetNames, says British brand owners should make sure they have registered their […]

Nectar may be dealing with its first sponsor drop-outs, but the loyalty card scheme is bullish and has major plans for the future, says Catherine Turner