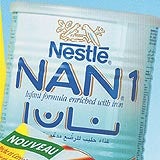 Nestlé’s plans to launch its Nan HA hypo-allergenic baby milk formula in the UK (MW last week) have focused yet more attention on the 25-year-old boycott of the Swiss food giant over its marketing of breast milk substitutes in the Third World.

The company was already in the news because of the withdrawal by Germaine Greer and other writers from the annual Hay-on-Wye literary festival, over Nestlé Rowntree’s Smarties sponsorship of a children’s book prize and the threatened boycott by leading comics of the Edinburgh Festival’s Perrier Awards for Comedy- Perrier being a Nestlé brand. This comes alongside criticism of a recent link-up with the International Federation of Red Cross and Red Crescent Societies’ anti-AIDS campaign in Africa (on the grounds that Nestlé allegedly uses the fear of transmitting HIV/AIDS from mother to child via breast-feeding to promote bottle-feeding).

Nestlé acknowledges that it faces most criticism on the baby formula issue in the UK. Only two years ago, Nestlé withdrew its Junior range of snacks and drinks for toddlers because of “disappointing sales” (MW May 5, 2000). While it is unclear what impact the boycott might have had on that range, Nestlé definitely has greater challenges to overcome in the UK than its rivals.

It may be easier in the UK than in developing countries, however. In 150 countries in the Third World, Nestlé claims to abide by the World Health Organisation (WHO) code on advertising and marketing of baby formula and other breast-milk replacements, adopted by the WHO in 1981 and updated every two years.

The WHO code provides a minimum level of regulation, which is replaced by local legislation wherever that legislation imposes more stringent restrictions. Most developed countries, however, seem to pay only lip-service to the WHO code – for example, it bans consumer advertising of baby formula, but as far as the UK is concerned, neither television nor press advertising are restricted (unless the manufacturers start making health claims).

The boycott must be doubly galling for Nestlé because the company’s view is that baby milks are its very reason for existing. Henri Nestlé’s first product was a cereal-based milk substitute, which saved the life of the child of a sick neighbour who could not breast-feed. Nestlé will not release figures for baby formula and baby milk sales worldwide, but its Management Report 2001 gives sales for “milk products” of SFr13bn (&£5.7bn).

Patti Rundall OBE, policy director of Baby Milk Action (BMA), the group that co-ordinates the Nestlé boycott in the UK, says: “It’s profits, pure and simple.” BMA figures suggest that all breast milk substitutes – follow-on milks, fruit drinks, non-dairy supplements and bottle-feeding equipment – account for a market worth $14bn (&£9.3bn) worldwide, and that Nestlé has between a 40 and 50 per cent share of that market.

In the Third World, the WHO suggests as many as 1.5 million babies die who might have survived had they been breast-fed, and stresses that breast milk is best for babies, if possible for at least six months after birth. It is a pure and natural food, it helps build up immunities to diseases and it reduces the risk of the mother becoming pregnant, it says.

Health activists claim that mothers in the Third World face pressure not to breast-feed from companies that have a vested interest in selling them substitutes for breast milk. Nestlé is not the only target for criticism: others include Wyeth, Nutricia and even Boots. Nestlé, however, is the biggest, and so has become the focus for campaigners.

Nestlé says that once a marketing tactic is banned by the WHO code, it stops using that tactic. For instance, it has been heavily criticised for distributing free formula to maternity hospitals. A Nestlé spokeswoman says that this practice was not banned in the original code, but that once it was, the company complied and stopped distributing it. BMA, however, claims that Nestlé marketers in certain countries get hospitals to order formula on the understanding that the company will not send a bill for the products.

BMA also claims packaging is often in the wrong languages, and adds that many developing countries have a problem with clean water supplies.

But Nestlé argues that its customers in so-called developing countries are primarily urban middle class and professional women who, like their Western counterparts, are increasingly going out to work. Furthermore, the company says it is insulting to suggest that such women are incapable of making up baby formula safely.

Nestlé says all communication materials stress that “breast is best”, and staff are trained in the WHO code. It is also setting up an ombudsman system to look into any allegations from company whistleblowers that the code has been breached. It has regular internal compliance audits, and in 2000 took disciplinary action in four cases, though it does not provide details of the cases or the punishments. BMA, though, says it has evidence of many more breaches.

Listening to both sides, it becomes very difficult to know who to believe. But, if Nestlé is adhering to the WHO code as strictly as it says it is, why, with all of its communications experience, has it not been able to lay these allegations to rest once and for all?