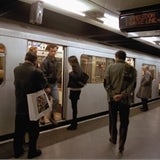 Network Rail and Transport for London (TfL), the two bodies due to offer contracts for new London freesheets to newspaper groups, are plotting to award a joint contract, in a move that could be seen as an attempt to squeeze a higher sum from bidders.

TfL’s contract would give a media owner the right to distribute a new title from all of its London Underground stations.

Network Rail, which owns every railway station in the UK and manages the largest 17, would allow its preferred bidder to distribute newspapers from Charing Cross, Euston, Kings Cross, Euston, Paddington, Victoria and Waterloo among others.

News International, Associated Newspapers and Express Newspapers are among those to have registered interest in the contracts up for tender. TfL will invite shortlisted companies to tender this month and a winner is due to be announced by autumn, while Network Rail plans to test the market with a secret online auction beginning next week.

Insiders from both bodies concede there are benefits in awarding a joint contract. No official discussions between the two have taken place.

Network Rail believes it has the more attractive demographic readership potential, claiming 1 million commuters pass through its stations each night, three quarters of whom are ABC1. TfL offers a potential readership of 3.2 million passengers every day.

A TfL source says: “Our view of a joint venture would be positive as it would command a better price and provide a more meaningful product for readers.”