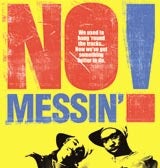 Network Rail is launching a campaign under the banner “No Messin'” to stop young teenagers playing on railway tracks.

The campaign will not carry any Network Rail branding, in an effort to give it more credibility with its target audience. The company is joining forces with several organisations for the campaign, to suggest alternative pursuits for bored teenagers.

Network Rail looks after all aspects of the UK’s railway infrastructure and is the “company limited by guarantee” that replaced Railtrack.

No Messin’ will be launched next week at London’s Victoria Station by Network Rail, Radio 1’s DJ Spoony and the British Wrestling Association. London agency ammunition devised the slogan and has created the imagery for a national station poster campaign. It has also produced a dedicated website, no-messin.com.

Network Rail head of marketing services Mark Shaoul says that the campaign is being launched ahead of the Easter holidays, when older children are left to their own devices and often trespass on tracks.

Director of government and corporate affairs Victoria Pender adds: “Our target audience is a difficult one for any company to reach, particularly on an issue like this, so the tone of voice is very carefully tailored. The conscious decision to withhold our branding from the campaign materials is recognition that for us, the message is more important than the messenger.”