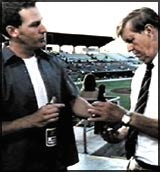 The campaign, which breaks next week, builds on an extensive press and poster campaign for the Budweiser variant. The four 30-second executions are based on the theme of great American contradictions, such as the World Series, which is based exclusively in the US, and bathrooms, which don’t contain a bath.

Media buying and planning is by OMD. Earlier this year, Coors delayed the national roll-out of Coors Light after a test campaign in Scotland highlighted the problems of marketing a ‘light’ beer.