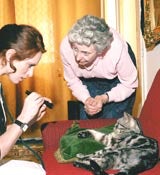 McCann-Erickson has created a new television commercial for Bacardi Breezer, which continues the Tom Cat theme as part of a &£13m marketing spend.

The latest spot sees the cat a little the worse for wear after living it up at a series of late-night parties. The advert features Tom’s elderly owner and a vet, who is unimpressed with the cat’s party lifestyle, which is shown through flashbacks.

‘Tom Cat has developed the status of the brand, becoming a celebrity personality that the audience have come to view as the essence of Bacardi Breezer,’ Doyle adds.

‘Vet’ breaks on July 22 and will run on ITV1, Channel 4 and Channel 5 as well as satellite channels including E4 and Sky One. Media buying is through Universal McCann.