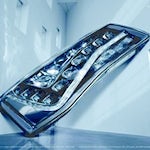 The campaign’s ’No detail is too small’ strapline is brought to life by taking three distinctive parts of the Audi A8 and displaying them as giant sculptures.

Each sculpture is accompanied by copy explaining the pioneering technology used to develop the part of the car being displayed.

Audi hopes the ads will give its A8 luxury saloon car the edge over its two main rivals, the 7 Series BMW and Mercedes-Benz S-Class.

The ads were created by Bartle Bogle Hegarty after being commissioned by Peter Duffy, the Audi UK head of marketing.

The growing success of Audi has seen the brand become the Volkswagen group’s crown jewel, with Audi now enjoying massive investment from its parent company. Audi is provided with €2 billion a year to invest in new car design and development alone.

The Audi A8 boasts features such as touchscreen handwriting recognition and infrared night vision with pedestrian recognition.

In the third quarter of the year, Google Earth navigation will be introduced to give a real-world, satellite view of the planned route. The A8 takes the total tally of Audi models to 37, while Audi hopes total car sales will pass one million this year.