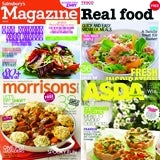 Half of the Top 10 titles and 25 of the Top 100 by average circulation are magazines produced by brands as part of their marketing communications and more than 60% of customer titles in the Top 100 are new entries or increased their circulation, according to the Association of Publishing Agencies (APA).

The supermarkets dominate the cooking and kitchen category, while Saga Magazine, published by the organisation that targets over 50s is the fifth most actively purchased title with an average circulation of 616,097 for the fist six months of this year, although it recorded a 0.6% fall in circulation compared to the previous six months.

Asda and Tesco’s free in-house magazines have the highest average circulation although both recorded a fall in circulation on the previous period.

Julia Hutchison, COO of the APA says: “Despite the squeeze on marketing budgets, brands are clearly continuing to see the value of branded content, underlined by the ongoing dominance of customer magazines in today’s ABC CCR report.

“Consumers are turning to brands for information and entertainment as they feel the pinch. Customer magazines continue to offer a tangibility and engagement that no-other medium affords.”

The backlash British Gas has faced following its recent profit report (British Gas ramps up communications to repair brand reputation, MW 4 August) comes as no surprise to anyone in the marketing or customer service industries, or those with a gas bill. The company’s failure to effectively and considerately communicate its fiscal position with customers […]

Legal services are next on the list of additional services that retailers, and in fact any corporate organisation, can offer following a change in the law. While it’s not relevant for all brands it’s an area where retailers have a natural fit and can bring customer service and plain talking in a way that traditional […]