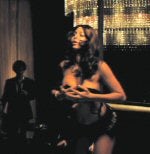 Abbott Mead Vickers.BBDO has created a controversial cinema campaign to raise awareness of breast cancer and encourage young women to check their breasts more often. It has teamed up with the charity Against Breast Cancer and Gorgeous Productions to make an 85-second film involving a pole dancer in a strip club.

Enver says: “Having both lost close family members to breast cancer, this project means a great deal to us. We hope this film will encourage young women to check their breasts more often.” The campaign will include a press, ambient and online presence.

Mobile operator 3 is reviewing its 39m advertising account after parting company with WCRS. The review follows the appointment of John Penberthy-Smith as marketing director last month.

Feasters, the Eatwell range of microwaveable sandwiches and burgers, has secured a £2m sponsorship deal with ITV for its game show Supermarket Sweep. The sponsorship deal will run for the duration of the 60 show series with the first episode of the game show, hosted by Dale Winton, scheduled to air on ITV1 on February […]

Britvic’s new pure juice products, Robinsons Smooth Juice and Fruit Shoot 100%, will be the first to be produced on its £7.5m aseptic production line, the company announced today. The move guarantees that all drinks produced using this line will be free of preservatives. Britvic says the new method of production will allow it to […]