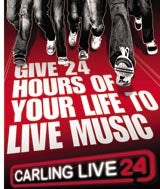 EL’s posters feature a paper-thin panel of treated organic phosphorus, which lights up when a small electrical current runs through the site. EL claims the system does not generate heat and uses up to 90% less electricity than alternative lighting.

The Carling campaign has been planned by Vizeum and bought through Kinetic. It includes London bus-side advertising until April 23, highlighting the 24-hour festival.