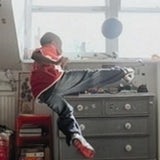 Clarks, the footwear brand, is launching a new television campaign to highlight its autumn/winter range. The drive, created by St Luke’s, breaks this week, and targets parents and children prior to the back-to-school period.

Based around the idea of imaginary play, one execution shows a boy wearing Clarks Spin Max trainers and playing “keepy-uppy” with a balloon.

The execution, “Football”, shows the boy pulling off a series of tricks before finally scoring by kicking the balloon through an open window. The soundtrack is The Jam’s “A Town Called Malice”.

Al Young, St Luke’s creative director, says: “There’s nothing more pleasurable for parents than seeing their children playing happily, and the music tracks have been chosen to remind mums and dads of their childhood.”