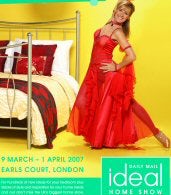 The campaign will focus on the usual home features such as decorating, but will also include executions featuring elements such as recycling and electronic goods.

The campaign will run across outdoor, radio, consumer and national press, as well as online.

Media planning for the Daily Mail Ideal Home Show is being handled by TCS Media and advertising creative is by Whippet.

DMG World Media has confirmed that npower will be title sponsor of the show for the fourth year running. Marks & Spencer will sponsor this year’s show house.

The Ideal Home Show is the UK’s largest consumer show with 330,000 visitors. The show is in its 99th year.

Sustain, the lobby group co-ordinating the campaign against “junk” food ads, has called on the Government to abolish ad industry self-regulation and the Advertising Standards Authority (ASA), which supervises it.

Deluded politicians are hoping to instigate a ‘buy British’ campaign by getting people to quiz waiting staff on the history of their dinner.

US sporting bodies are belatedly exploiting their commercial potential but the Super Bowl shows that broadcasters are quicker off the mark.