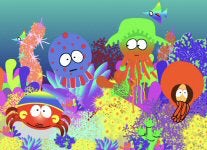 Greenpeace has launched a spoof of animated show South Park as part of a campaign to stop fisherman using deep-sea dragging or “bottom trawling”.

The viral, which is now being rolled out, aims to put pressure on the Canadian Government to stop allowing Spanish fisherman to use the method in its waters. The campaign coincides with talks on sustainable fisheries at the United Nations.

South Park characters Cartman, Kyle, Stan and Kenny, are animated as different sea creatures and launch a broadside at Canada and Spain, with expletives, before a large net scoops “Squiddy” – aka Kenny – off the ocean floor. Prompting the catchphrase: “Oh my God! They killed Squiddy!”Then the group breaks into song, to the tune of the Oscar-nominated “Blame Canada”, bashing Canadian officials for their refusal to support a ban while mocking Spanish fishermen who trawl “because we can”.

Greenpeace says it hopes to raise awareness of the issue among younger people.

It seems astonishing that shortly after his soggy nomans land warning about the likes of ITV2, James Murdoch should write a cheque for 940m to buy a share of ITV. Yes, he wants to keep Virgin at bay, but he also has plans that could dramatically change the TV ad market. By Dominic Dudley.

The National Lottery has lost nearly 3 million players over the past four years as consumers desert the game in huge numbers, according to figures revealed by operator Camelot. The proportion of UK adults playing the Lottery has slipped from 75% in 2001/2 to 69% this year, according to Camelot’s Corporate Responsibility Report for 2006. […]

Pigsback.com, the permission-based marketing scheme website, has appointed Brian Harrison as UK managing director. He joins from Thomson Directories where he was general manager for the internet. The appointment follows a £2.5m private equity investment to support an advertising push announced last month. Harrison has been tasked with driving revenues and securing 1 million members […]