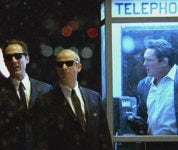 Mother has created an ad for the telecoms giant featuring the Hollywood superstar, who played Mr Blonde in the iconic film.

The ad, which breaks on Friday and runs for three months, is the latest in the “Film Funding Board” series featuring Mr Dresden, played by Brennan Brown, and his sidekick, played by Steve Furst.

The new ad, which reminds people to turn their phones off before the start of films in cinemas across the UK, sees the characters move out of the boardroom for the first time.

The executives disrupt filming of Madsen’s Orange-funded film, “The Phonebox Killer”, saying that phoneboxes are “so 19th century” and that the film should feature mobile technology.

Orange has held the rights to Gold Spot since 2000 and signed an extension to the deal at the end of last year.

BP has axed its top global brand marketing role following the departure of Tom Vaughan, and handed responsibility for brand to its communications chief. Vaughan, who was general manager of brand and marketing communications, has left the oil giant after six years to join law firm Burges Salmon as marketing director. He has not been […]

Opodo, the pan-European online travel company, is to slash dozens of jobs as it decentralises its operation. But the brand’s values and marketing strategy have come under intense scruitiny as it struggles to keep its position in a market now dominated by big players. By Robert Lester.

Smart marketers should refrain from over-exuberabce about digital media until they have critically examined four important issues.