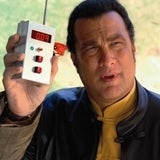 Seagal attempts to pitch his idea for a new romantic comedy to board executive Mr Dresden, but the idea immediately encounters difficulties, with Dresden trying to shoehorn Orange references into the script. Seagal refuses to budge and has to resort to hard-man tactics, disposing of Dresden’s kung-fu minders before pursuing him across the course in a high-speed golf buggy chase. Finally, Dresden escapes by helicopter but, in true action-hero style, Seagal has the last laugh.

The ad will be used in Orange’s “gold spot” – the prestigious final advertising slot before the start of a film, to which Orange has exclusive rights.