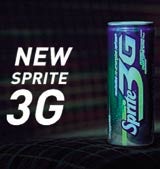 The through-the-line campaign will break later this month and include TV ads that will run throughout the summer, supported by outdoor posters and online activity, a national one million can sampling programme and distribution to all major grocery, forecourt, multiples, convenience and wholesalers.

The TV ad builds on the “wrong sprite” theme and shows a passenger on a bus struggling to stay awake. To the sound of inhuman screams he is attacked by a baby sprite goblin who lands in the passenger’s lap and starts to demolish his newspaper. The strapline is/ “A new member of the Sprite family has just arrived – Sprite 3G.”

The ad has been created by Lowe Worldwide. The media planning and buying was handled by Vizeum and Universal McCann.