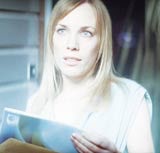 FCBi London has created a campaign for the Open University, based around its proposition of accessible education for all.

The “Powering People” campaign, which includes television and press advertising as well as below-the-line activity, says learning is as much a basic human right as heat and light and should be just as accessible.

The TV spots show current students illuminated by the “glow of knowledge” that comes from their studies and glowing lettering reinforces the concept in the press ads.

The campaign is designed to raise awareness of the Open University’s proposition and aims to boost enquiries from potential higher and further education students who are looking for flexible education opportunities.

The campaign follows the Open University’s rebranding this year. Zed handles media planning and buying for TV and press and Response One for direct marketing. The Discovery Channel is looking for an agency to handle an advertising brief to promote the channel in the autumn

Marketing manager Lisa Crabb will oversee the pitch, which is being handled by the AAR. A shortlist has yet to be drawn up. The brief calls for “a fresh and clean approach” for the pay channel, which is viewed predominantly by men aged between 29 and 54 years old.

The Discovery Channel’s recently appointed channel director, Jill Offman, has just commissioned a raft of new programming. This includes a strand looking at how sci-fi movies have influenced modern science. Sci-Fi Saved My Life will refer to influential films, including the Star Trek series, The Matrix and The Terminator. She has also commissioned The Secret Life of Nostradamus, a docu-drama about the 16th-century prophet. A series about engineering has also been commissioned, which follows engineers working on huge projects such as constructing an oil tanker.

The advertising brief does not extend to Discovery Networks Europe’s other channels.