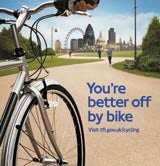 M&amp;C Saatchi’s new campaign for Transport for London, entitled “You’re better off by bike”, aims to get more Londoners out of their cars and onto two wheels.

Television ads will break at the end of this week, and slogans will be appear on shopping baskets at bran- ches of Sainsbury’s Local and Tesco Metro.

Planning and buying for the campaign is through Mediaedge:CIA. The press and poster campaign will start from April 1.