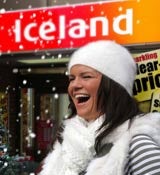 Retailer Iceland is to use a celebrity in its advertising for the first time in a new television, radio, press and direct marketing campaign.

The ads, which will break in October and run until December, will focus on the “quality, value and convenience” of the store’s Christmas lines. Planning and buying is through MediaCom.

The campaign is the first from the retailer since it handed its &£10m advertising business back to Tom Reddy, the agency that came up with its famous “Mum’s Gone To Iceland” strapline in the 1990s. HHCL/Red Cell previously handled the business.

Aegis, the media buying network, has revised its forecasts for advertising expenditure growth for the rest of the year, with the UK marked down to 3.7 per cent from almost five per cent.

Advertising remains a hugely important element of marketing, but brands need to engage in a personal dialogue with target consumers if they are to thrive, says Sue Farr On a recent visit to a client in Glasgow, I stumbled across an excellent live brand event that brought together two products in a hilarious manner. The […]

How will graduates find entering the workplace during a downturn? We ask the class of 2008 how they coped.