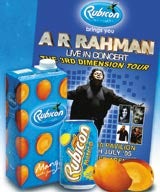 Exotic juice drink brand Rubicon is to sponsor some of the biggest music events of the summer, including the Queen and REM concerts at Hyde Park, Kew Gardens’ Summer Swing and the Notting Hill Carnival.

Rubicon has also secured the sponsorship of the first UK performances by Indian pop star AR Rahman, who wrote the music for Bombay Dreams. Rahman will play Wembley Arena on July 30 and Birmingham NEC Arena on July 31.

Rubicon’s Summer of Music is part of a £3m marketing campaign. More than 3 million samples of Rubicon’s guanabana, guava, lychee, mango and passion fruit juice drinks have been and will be distributed at events including the Wireless Festival, Queen and REM, Summer Swing and the Notting Hill Carnival.

In the lead up to “Rubicon brings you A R Rahman Live in Concert”, the brand will gain exposure through advertising for the concerts on MATV, Sony TV, Star Plus and Zee TV, and through radio stations Sunrise Radio and Radio XL.