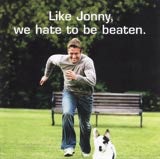 Both versions of the ad will play on Wilkinson’s competitive attitude, and feature the strapline “We hate to be beaten”. The integrated campaign, which breaks later this month, promotes Travelex’s online foreign currency guarantee – that it will refund the difference if UK customers don’t get the best price on their foreign currency.

The campaign is aimed at ABC1 males and will be shown nationally on terrestrial and satellite channels. It will be supported by six-sheet poster activity in July. Walker Media is handling media planning and buying.

Wilkinson was appointed as a Travelex brand ambassador last month.