The nine-year itch has struck again for Toyota GB’s commercial director Paul Philpott. After nine years at Ford, Philpott has spent the past nine years helping Toyota become one of the UK’s leading car manufacturers. Now he is joining Kia to try to do it all again.

Philpott resigned from one of the top marketing jobs in the UK car industry earlier this month, as exclusively revealed on marketingweek.co.uk, and will join Kia UK as managing director on February 5. The 40-year-old is the last of the triumvirate credited with the marque’s unprecedented sales growth over the past decade to move on following the departure of former commercial director Mike Moran four years ago (MW January 30, 2003) and former managing director Graham Smith’s promotion to Toyota Europe last year (MW May 11, 2006).

The story of Toyota GB’s rise to prominence began in 1993 when Smith joined from Ford of Britain. He became marketing director a year later and managing director in 1995. Smith appointed Moran, another former Ford man, to head the marketing department in 1996 and Moran brought in Philpott as general manager of vehicle marketing a year later.

Climbing the Ladder
Philpott was promoted to marketing director in 1999 when Moran was handed the new role of commercial director (MW August 26, 1999), and Philpott later inherited that title himself when Moran left to join Thames Water in 2003. Smith became senior vice-president at Toyota Motor Europe in July last year, while Moran now runs brand and marketing consultancy The Orchard Consultancy and motoring consultancy The Automotive Partnership.

A Toyota source claims that Philpott was being lined up for the European marketing director’s job at either Toyota or Lexus and that a move to Toyota Europe’s “bureaucratic jungle” did not appeal to him. But the chance to step up to become managing director at a company as ambitious as Kia appears to have been the overriding factor behind Philpott’s decision.

“It wasn’t a case of Toyota not giving me the opportunities but Kia being an exceptional opportunity that I felt was right for me,” he says. “Kia is a very ambitious company without a very clear sales and marketing strategy and with a fairly poorly defined brand. It has the potential to grow, but providing the right brand strategy and sales and marketing implementation is key.” 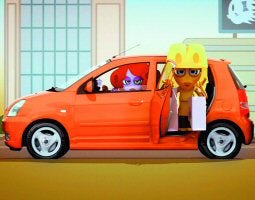 Following Toyota’s Path
Moran describes Philpott as “bright and thoughtful” and believes he will take Kia on a journey over the next five years that will make it a more desirable brand. “When we started at Toyota it was black and white with no brand image and no aspiration,” says Moran. “It was very much a low player in terms of brand and volume but we turned it into a brand with a lot of customer appeal. Kia is in a very similar place to Toyota ten years ago. It has got volume aspirations but is not really sure how to get there.”

Toyota’s sales doubled from about 60,000 to 120,000 during Philpott’s nine years at the company. Kia sold 35,814 cars in the UK last year, according to the Society of Motor Manufacturers and Traders (SMMT), and Philpott predicts its rate of growth could be even more rapid than that experienced by Toyota.

“The product range is coming and the quality is coming,” he says. “If we can get the desire into the brand we can grow even more quickly. That’s the challenge for me personally. It’s about setting the right tone within the organisation. The development of the Kia brand from pretty much a blank sheet of paper is one of my primary tasks for the next three years.”

Kia is about to launch its new Cee’d hatchback, which has received rave reviews from the motoring press, to go up against the likes of the Vauxhall Astra, the Ford Focus and the Volkswagen Golf in Europe. It is the first Kia to be completely designed and produced in this continent and will be built at the company’s new €700m (£470m) plant in Slovakia.

Designs on Europe
Kia, which was bought by fellow Korean car manufacturer Hyundai in 1998, hired Peter Schreyer, the man behind the Audi TT, as its global design chief at the end of last year. James Dingle, group account director at Kia’s UK advertising agency Mustoes, says/ “Kia is extremely dedicated to being successful in Europe. It has significantly improved its product range in the past year and now has seven models – five of which are completely new, launched within the past 12 months. I don’t think any other manufacturer can say that.”

But Dingle acknowledges that changing perceptions of the brand, which has adopted an aggressive price-focused strategy in the past, will be one of Philpott’s biggest challenges. “Kia needs to communicate the fact that there is now a lot more quality in the product,” he says. “It has to invest to make it more quality focused. It’s a company that’s really going places but now it’s important to explain what Kia stands for as a brand and to have consistency of message.”

Along with the rest of the UK market, both Toyota and Kia struggled last year. Kia’s sales were down almost 10%, while Toyota suffered a 4% fall according to the SMMT. But Toyota continues to impress globally and it is only a matter of time before it overtakes General Motors to become the biggest car manufacturer in the world, according to associate professor at Warwick Manufacturing Group Charles Tennant.

He says that Philpott leaves behind a company in great shape and adds: “Toyota has taken a long-term strategic view over the past 20 years and its engineering capabilities are renowned. It has not compromised on quality at all. Lexus is also a fantastic brand. The engineering is meticulous – they are built like cathedrals. With the volume of Toyota and the exquisiteness of Lexus it is a real force to be reckoned with. The secret is that, unlike Ford and GM. Toyota is building volume on a profitable business.”

Philpott is well known not just in automotive circles but also in the wider marketing community as a member of the Incorporated Society of British Advertisers executive committee and a fellow of The Marketing Society.

Moran thinks his former colleague is well suited to his new role: “Paul thinks things through and has a good eye for detail but is also able to understand and buy into the strategy and see the bigger picture. That’s what makes this a good challenging move for him. People at Kia will be looking to him to chart the roadmap and show them the way forward.”

If history is anything to go by, Kia can look forward to nine years of that.

Paul Philpott CV
1988 – Joins Ford of Britain as a sales and marketing graduate trainee. Holds various marketing roles before being made brand manager for small cars, responsible for the launch of the Ka and the Focus
1997 – Leaves Ford to join Toyota GB as general manager of vehicle marketing
1999 – Promoted to marketing director after Mike Moran is handed the new role of commercial director
2003 – Becomes commercial director when Moran leaves to join Thames Water January
2007 – Resigns from Toyota to join Kia UK as managing director

Each week in association with retail and marketing consultancy Pragma, MarketingWeek.co.uk looks at a high-profile UK brand, assessing its performance against a range of criteria and offering suggestions to improve its overall score. Marks for each section are given out of five stars, while the overall rating is given at the end of the review.

US video games publisher Electronic Arts is extending its The Sims franchise with the launch of The Sims Stories. It aims to build on the success of the existing Sims’ games and bring in new gamers. The game, which will be lap-top friendly, will introduce new characters and game play will follow a specific plot […]