Industry experts believe that new chief executive David Abraham will find Channel 4 in a strong position when he takes up the role.

While Abraham and new chairman Lord Burns still have to secure the long-term future of the broadcaster following the apparent collapse of merger talks with BBC Worldwide, it is thought that Channel 4 has a breathing space to formulate its strategy.

Chris Locke, UK trading director at Starcom MediaVest group, says: “Broadcasters have to fight ever harder for every advertising pound, but Channel 4 is in all the right touchpoints – it has digital, online and video-on-demand access.”

He adds: “It has good product, a good brand and is good at promoting that brand.”

Abraham led UKTV through the rebrand of all its channels that started with the transformation of G2 into Dave. Locke points out that he seems to understand the consumer.

Observers say that the immediate challenge is to fill the airtime and coffers that will be emptied when the Big Brother franchise comes to an end for Channel 4 this year.

Last summer, director of television and content Kevin Lygo said the broadcaster’s drama budget would be boosted by £20m following the axing of Big Brother.

Channel 4’s interim management team, led by acting chief executive Anne Bulford, will remain in place until Abraham’s arrival. There is speculation over whether Lygo will remain, as he was also a contender for the chief executive position. 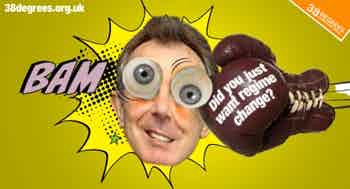 Online lobby group 38 Degrees is running a digital poster campaign to highlight key questions the general public would like Tony Blair to face ahead of his highly anticipated appearance at the Iraq Enquiry today (29 January).

Barclaycard is to launch a loyalty scheme that allows its customers to redeem rewards accrued straight away in thousands of stores nationwide.