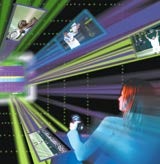 When the new digital channels offered by the BBC and technology company Crown Castle start broadcasting this September, there will be mixed feelings among UK advertisers.

Last week’s Independent Television Commission decision to appoint a BBC-led consortium to take over the running of the digital terrestrial television (DTT) licences B,C and D, following the collapse of ITV Digital, signals a serious setback for advertisers, according to some observers. Others see it as a chance for ITV to concentrate on fighting back a resurgent BBC.

BBC marketing director Andy Duncan believes the plan will rescue free digital TV from oblivion, motivating millions of households who previously shunned digital pay-TV to buy a &£100 set-top box and get multi-channel digital TV free. He says: “This is a completely fresh start. We are after the 15 million households that haven’t gone digital. We have put together a very consumer-focused approach.”

Duncan believes that when people compare the present four or five channels with the advantages of having 24, DTT will prove an attractive offer. And for the BBC, he argues, it all comes at little extra cost: “The total extra cost for the BBC is &£10m to &£15m a year, on distribution and marketing.” The BBC was already paying ITV Digital &£20m a year to broadcast BBC channels, and it will pay &£35m a year to run the free-to-air digital service. The &£200m a year spent on content for digital programmes (less than ten per cent of the BBC’s total spending) would have been spent anyway.

While advertisers’ trade body the Incorporated Society of British Advertisers has broadly welcomed the BBC’s win, others are not so pleased.

Neil Johnston, TV buyer for media agency OMD UK, believes that ITV and Channel 4 will be squeezed on two fronts in the battle for control of television’s future. Free-to-air digital television will be controlled by the BBC, which does not take ads – only ten of the 24 channels will offer advertising – and digital pay-TV will be dominated by the subscription-based BSkyB, for which advertising brings in only 20 per cent of revenues. He says: “The two biggest suppliers of commercial audiences are not included in the future direction of UK television. Once again, the interests of the Government (and the BBC) have been served, but the interests of those who actually fund the majority of UK television – advertisers – have been ignored.”

The other serious bidder for the multiplex licences was ITV, in association with C4. Surprisingly, ITV now argues that it is better off without the licences. A spokeswoman says: “There is a lot of relief at ITV that we haven’t got those licences. It would be another diversion of time and funds when we are trying to concentrate on the ITV1 fightback.” She adds that it is “nonsense” to suggest that ITV will be disadvantaged under the new system, and insists that ITV has always been at the forefront of interactive advertising – although critics say that interaction on ITV Digital was “clunky”. The spokeswoman says ITV will continue to offer interactive ads on the new system.

And she says: “I am convinced the BBC will introduce pay-TV later on.”

Indeed, BBC director of strategy Carolyn Fairbairn almost said as much in one radio interview: “What we would like to do in the future – it won’t be for a while, because the platform needs to settle down, consumer confidence needs to be restored – [is] we will definitely consider adding pay channels at that point.”

Some see C4 as the real loser in this shake-up, as it will lose a medium through which to promote its pay-channels, E4 and FilmFour. But if a pay-TV element is added to the current DTT line up, it could benefit those channels.

Whether the scheme will help to achieve the Government’s aim of transferring 95 per cent of UK households to digital by 2010 is another question. Some believe the attractions of DTT are not sufficient to inspire digital sceptics to take up the offer – there is little which could be described as a serious traffic-builder. It will appeal to Middle England, and as Johnston says: “It smacks of worthiness.”

The September launch should be a spectacular affair from a marketing point of view: Duncan says that it will be given “the heaviest-weight activity the BBC has ever given to anything”. Through a joint company – ServicesCo – the BBC, Crown Castle and Sky will offer combined marketing and Duncan says other broadcasters are welcome to join in. ITV says it is still considering its position. A C4 spokesman says: “I am sure we will talk to the BBC.” But C4 seems unlikely to help promote free-to-air DTT, when its aim is to extend take up of its pay-channels.

The marketing campaign will need to be a huge success, though, if the platform is to hit its target of attracting 5 million households within five to seven years.

Rivals Digital Media marketing director Chris Reed is leaving the company to set up his own sports and consumer marketing consultancy, Chris Reed Marketing (CRM). Reed, who has been marketing director of Rivals for two years, launched the Rivals.net brand in 2000 as the “definitive fans’ brand”. It now encompasses 92 individual English football club […]