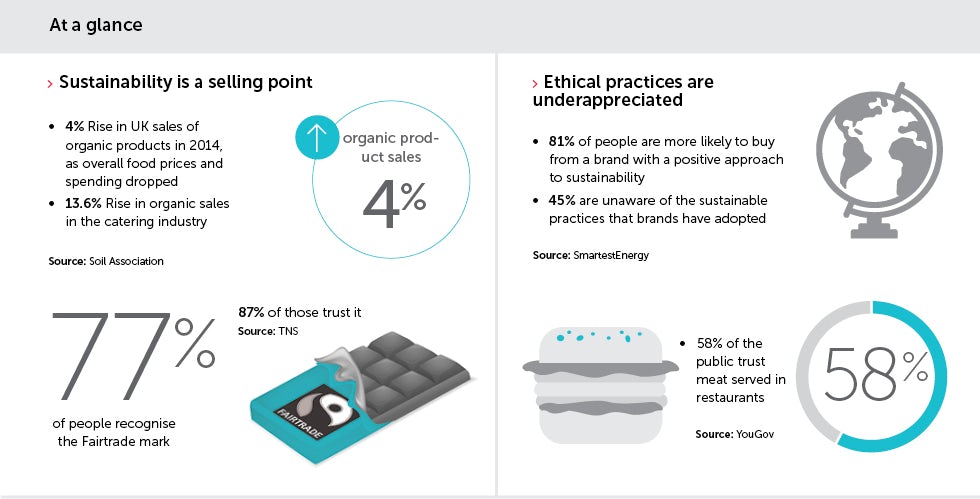 Consumers’ appetite for sustainable products – which seemed insatiable before the 2008 financial crisis – is again growing ravenous as the economy recovers from recession. Food brands in particular are now seeing ethical sourcing, not just affordability, as a key differentiator once more.

The Soil Association says that UK sales of organic products rose 4% to £1.86bn in 2014, against a backdrop where overall food prices fell by 1.9% and consumer spending on food dropped by 1.1%. In the catering industry, organic sales rose 13.6% to more than £7m.

Big brands are now making a new effort to respond to accelerating demand for responsibly sourced food. McDonald’s, the world’s most valuable food brand, announced a commitment in April to eradicate deforestation from its supply chain, while in the same month KFC owner Yum Brands made a similar commitment regarding its sourcing of palm oil. Developed with the advice of WWF, McDonald’s policy comes at a watershed moment for the struggling fast food giant, which is looking to restore positive brand perceptions in an effort to turn its finances around.

“In the past, there has been a tendency for the largest food service companies not to shout about their sustainability initiatives, but now we’re increasingly seeing businesses wear their sustainability credentials on their sleeves,” says Nick Hughes, food sustainability advisor at WWF. Hughes is not commenting specifically on McDonald’s, but the many brands WWF works with as part of its One Planet Food programme.

However, research published last month shows that while 81% of consumers say they are more likely to buy from a brand with a positive approach to sustainability, almost half (45%) also say they are unaware of the sustainable practices that brands have adopted. Meanwhile, a survey published in April by YouGov shows that only 58% of the general public trust the meat served in restaurants. Brands still have some way to go, then, to restore trust in ethical food sourcing.

Dr Frank Wijen, associate professor of strategic management at Rotterdam School of Management, says that some companies deliberately undersell sustainability for two reasons: “First, they fear that bragging will backfire when media or other external stakeholders get hold of a corporate practice or incident perceived as unsustainable. Second, they fear that sustainability is associated with tree hugging, repelling prospective customers.”

Yet elsewhere in the food industry there is evidence of a trend towards sustainable sourcing that has been going on behind the scenes since 2013, when horse meat was discovered in industrially produced foods sold as beef, causing an international scandal. Catering brands, for example, are keen to avoid another one.

“Sourcing is high on the agenda for our clients,” says Julia Edmonds, managing director at Lexington Catering, which gained the maximum three-star rating from the Sustainable Restaurant Association. “Some are looking at organic but generally it’s about local supply. People want to know where their food comes from.”

Hannah Strong, sales and marketing director at Food by Dish, concurs: “Sustainability is a must-have, rather than a nice-to-have. Recently, particularly since the horse meat scandal, clients ask about the origins of their food, especially whether it’s reared and farmed in Britain.”

Sourcing locally might seem like a sensible option, but regional supply levels and the locations of restaurants or catered events mean food brands continually have to reassess their procurement and build new relationships. Sourcing within a 30-mile radius is likely to be a lot easier and cheaper in Somerset than in Shoreditch.

“Sustainability is a must-have, rather than a nice-to-have.”

“Only providers with corporate responsibility and sustainability embedded in their strategy and continuously making meaningful progress will flourish in this space,” says Yoon Chang, sales, marketing and strategy director at Sodexo Prestige.

The company helped to source nearly 90 tonnes of food for the 2014 Commonwealth Games in Glasgow. All the food had to be in line with the event’s strict charter mandating the use of sustainable, seasonal and regional products. Furthermore, Sodexo offers an ‘alternative bid’ when it tenders for public-sector contracts, where staff will be paid at least the living wage, rather than the minimum.

Until recently, ethical food sourcing focused on workers in far-flung places, with Fairtrade synonymous with good practice in developing countries. While this works for high street brands, the relatively small range of Fairtrade-certified suppliers will not necessarily sit with the needs of highly specialised food offerings.

Gather & Gather sales and marketing director Heidi Stone says: “Fairtrade is a fantastic initiative, but if you are looking at creating something that is an artisan, barista experience, you need to do that with ‘direct trade’ coffee rather than Fairtrade. Saying all our coffee is Fairtrade doesn’t provide all our clients with what they need.” Given that Fairtrade is recognised by 77% of the public and trusted by 87% of those, explaining the lack of a Fairtrade logo is not easy.

Another lingering challenge is that sustainable food often comes with a premium price tag. Jacques de Cock, faculty member at the London School of Marketing, says food brands are faced with a choice: “Do they switch to a more expensive option to tick the green box, which will matter to few people, or do they go for a cheaper option with no discernible difference in taste or appearance?”

However, he adds: “If sustainability, ethical consumption and organic farming are central to a brand’s values and identity, these elements will be a high priority in the [customers’] minds.”

As sustainability once again becomes a point of differentiation, it is likely to apply to a increasing number of food brands. 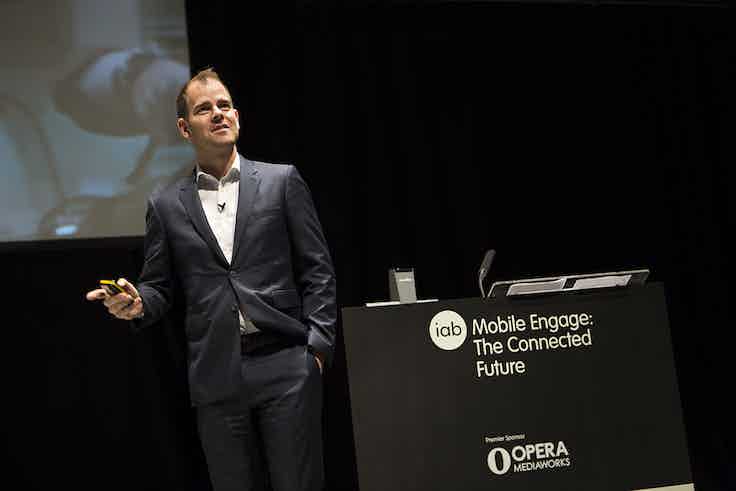 Marketers are still not ready to fully put their faith into mobile, even at the most basic level, and “criminally” failing to personalise the experience, according to Google’s sales director Martijn Bertisen, who was speaking at today’s annual IAB Mobile Engage event.

This week I had to deal with a very delicate subject that involved a matter that it is dear to my heart – diversity in the workplace.

Language has the power to shape our beliefs and make us behave in a certain way. If, as research suggests, it is what we hear that counts, not what we say, it means we all have a responsibility to understand and use the psychological tools within language to communicate clearly and with transparency.