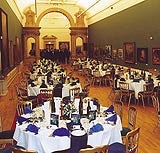 Many companies appear to be opting out of the Christmas party scene this year, however, and battening down the hatches for a potentially tough year ahead. And any conferences or events that do grace the company diary are becoming more novel, held in venues that are unusual and innovative and which can be tailored to companies’ needs and wishes.

Janine Duplessi left fashion PR to set up bespoke venue-finding service Apposite when she realised that many companies were settling for conference hotels because finding that extra-special venue was just too difficult and time-consuming. She says: “Companies are always looking to promote products through cutting-edge venues that reflect the image of the product. You’ll have problems if you don’t choose a venue that’s suitable for the image of the client – it’s pointless choosing a historic building for a cutting-edge IT event, for example. It doesn’t sit well.”

The long and the short of it

She adds: “Last year, Laboratoires Garnier needed a venue to show its product to German journalists. This entailed setting up computer terminals and coloured lighting as well as reflecting a fruit aspect – everything, including the furniture, had to be yellow, green, red and orange, which we had to source. Garnier also wanted to create a salon environment, as it needed to wet and style models’ hair. The Vauxhall Gallery in South-west London, at 23,000 square feet, proved the perfect setting. It is a huge white space, usually used as a private gallery, and fitted in beautifully with the image that Laboratoires Garnier were aiming to project.”

With unusual spaces come unusual practicalities, however, and there will often be issues that aren’t a consideration in a run-of-the-mill exhibition centre. Fay Sharpe, sales and marketing director at IBR, one of the UK’s largest venue-finding companies, says companies should research venues thoroughly, and create a checklist for each event to ensure they don’t come unstuck. She says: “For example, if it’s a conference you have to look at technology. Do you put production in? Is the ceiling high enough? Can you black out the venue? Do you need phone and ISDN lines?”

She continues: “At a dinner, your checklist is different. Can you smoke? Drink? How many toilets do they have, and where are they? Where can you provide cocktails? What time can you access the venue? Is it open to the public during the day, for example? What restrictions does it have? How late is the licence? Is there enough power for a band or disco?”

Jean Jackson, marketing officer for corporate hire and museum events at Nottingham City Museum, acknowledges that there have to be restrictions on the public venues she oversees – the Castle Museum, Wollaton Hall and Newstead Abbey – but says rules are kept to a minimum: “We have to have time to set up the museum after it closes at 5pm, which takes quite a lot of work as it’s important to lose that municipal feel for evening functions, and staff need a break if they are to work through the evening as well as the day. We have to change the toilets, we put in flowers, tissues, soaps and towels, for example, and naturally they must be spotless. We also move seating and exhibits out of the gallery.

“We don’t have on-site catering – I have an approved list of caterers, giving people a choice of menu and budget, who cook off-site. They often have to work in small spaces, even on staircases sometimes. We obviously have to protect these areas, which we do with rubber matting on the floors, and we’ll cover walls too if they have prints or paintings on them. We don’t mind red wine, but we don’t allow smoking because the castle is a Grade I listed building.

“There are things we can’t do. We can’t black out windows, for example and there are certain large presentations that our keeper of fine art would have to oversee, as we need to consider what damage equipment such as back projection units can do to artefacts. However, we have relatively few problems, and any we do have, clients usually aren’t aware of.”

It’s not just listed buildings that have restrictions. A venue’s shape can often be a challenge, too. But Martin Neale, general manager of the Concept Centre at Millbrook, believes that this is more often an advantage than a problem.

He says: “We’re a dedicated events venue without any specific area. Although the space is ergonomically interesting, it’s a designer’s nightmare, so we learned to be a full-production venue, arranging big-budget events and providing a blank canvas, which is important to agencies at the moment. People don’t want square rooms with dado rails and wallpaper. Companies want to paint their own brand onto the space they are using. People are also looking at a more interactive approach, and with fixed stages and auditoriums you can’t do that.”

Built 12 years ago, the Concept Centre boasts a series of vehicle tracks, making it ideal for the automotive industry. Gill Stoddart, Audi account director at event organiser WPR, finds that having to create a whole event from scratch is more of a bonus than a setback: “It means we don’t have any preconceived ideas – having a blank sheet of paper allows us to be creative in our usage of the space.”

In January 2001, WPR was responsible for the Audi A4 launch, which it held across the Concept Centre and the newer Concept 2, which had just opened. Stoddart says: “It wasn’t a cheap event, as we brought in furniture, lighting, sound, everything. But we’d have probably used our own sound centres and equipment in a hotel anyway, as what is often provided isn’t of a high enough standard.

“We were the first company to use the Concept 2 building. We put up false screens that acted as both temporary walls and video screens, and when clients moved to another part of the centre we tweaked the area they’d just left and readied it for the next part of the conference. We also used three other rooms in the centre, and we linked all the rooms by creating a white “cocoon” tunnel effect throughout, giving continuity to both centres and the domes. Clients got to drive the car on the track – as the car wasn’t to be launched for another two months, the privacy of the track was essential.

Over the past four years, the Concept Centre has expanded its non-automotive business, which now accounts for 60 per cent of its trade, and one of the venue’s main selling-points is secrecy. Neale explains: “When Sony held its PlayStation 2 developer launch here, it had a number of concerns. Obviously it wanted a PlayStation image – which it got – but it was also concerned about industrial espionage, partly because PlayStation 2 hadn’t been released in this country but also because the computers the developers use are classed as military hardware. For Sony to have a funky venue that fits within a 700-acre site was perfect. It got secrecy and security.”

Secret planning is often a critical factor in launching concepts, and confidentiality was a vital issue when the Consumer Needs Consortium launched the Jigsaw Consortium Ltd (a group of executives from various consumer companies which analyse the food and drink industries) in June 1998. Once again, the Concept Centre was used, creating a hi-tech atmosphere with high security that gave the event a feeling of importance, while being large enough to allow the company to splash its new logo across the two domes and portray a powerful image. CNC’s Jo Patterson says: “The Concept Centre enabled us to create an impact: not only did it reflect the innovative nature of Jigsaw, but its secrecy and high security added a sense of intrigue to the day, perfectly reflecting the nature of the project.”

It is becoming clear that innovation in venue co-ordination adds interest to an event, and the most popular events are the ones at which the novelty value is high. In July 2001, IBR arranged a cocktail party for 40 clients at Dali Universe in London. The guests were greeted by Dali lookalikes and hostesses before being treated to champagne and Spanish tapas, followed by a spin on the London Eye. Sharpe says: “The cost of an event like this isn’t prohibitive. It does depend on the quality of the food and drink, however.”

Inevitably, the cost of hiring unusual spaces varies considerably, from £1,000 a day at the Nottingham City Museum to £9,950 a day for the Concept Centre (plus £5,950 excluding VAT for Concept Centre 2). Venue finders on average take a fee of 20 per cent of the cost of the venue. Naturally, catering costs, equipment hire and entertainment are invariably a separate consideration at these venues and stretch the budget a little more; but the size of that increase is largely down to individual companies. Only a very few will indulge their clients with vintage Krug and after-dinner speeches from Prince Charles.

aces say they believe novelty value encourages larger attendance, thus negating any extra financial outlay. The fact that many of these venues do not offer accommodation does not seem to put people off, as this is less vital to an event’s success that the quality of the food, drink and overall presentation.