Launching a new tobacco brand is a lot more problematic than product launches in other categories, and begs the question ‘how do you get it in front of consumers?’

Tobacco manufacturers are mired by preventative legislation that restricts any form of advertising.

The days when brands such as Marlboro were splashed all over Formula 1 race cars and tracks as part of multi-million dollar sponsorship deals are long gone. Brands are limited by the labels they can use on cigarettes and since 2003, phrases such as ‘light’ and ‘mild’ have been outlawed as descriptors and 40% of the product packaging must now contain health warnings.

Almost every last trace of cigarette brand advertising has been wiped out, with the final step to come into force in 2011, in the form of the tobacco display ban.

The ban comes under the Health Bill on the basis that the displays act as an advertisement for the brands, and encourage youngsters to take up the habit and will ban shops from retailing cigarettes in gantry displays behind the counter.

Smokers are staunchly brand loyal, and tend not to switch very often, if at all. If they do so, it is generally towards a ‘light’ variety.

With no avenues to advertise, time is running out for new cigarette brands to convince smokers to make the switch, and when the display ban comes into effect and retailers are forced to keep tobacco products under the counter, out of eye-sight, I think it’s even less likely that smokers will switch brands.

But it seems that with this launch, Marlboro is on to a winner in a number of ways.

Despite the lack of opportunity to market the new product, its ‘catch all’ tactic taps into several prospective consumer groups.

By making Bright Leaf, cheaper than its Marlboro stalemates, it offers a cheaper alternative to consumers feeling the pinch of soaring prices but loyal to the brand and unwilling to switch to another.

It is also extending its appeal to consumers currently smoking rival brands by offering a different blend of tobacco from its other Marlboro brands.

The cigarettes will also come in a side hinged pack, unlike the standard flip-top pack. It looks a bit like a Zippo lighter. Non-standard pack designs have been used before by brands including Marlboro and Lucky Strike on limited edition packs and they never fail to arouse some curiosity and chatter amongst groups of smokers.

So, by introducing the new variant in unusual packs, Marlboro will harness the power of word of mouth marketing and the brand will sell itself.

Marlboro claims its competitive price point gives retailers up to 30% higher margin than on other brands, something that will appeal to retailers that feel they will loose out on revenue when the ban comes into effect. 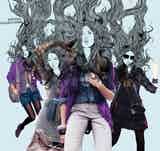 Spanish fashion retailer Mango is introducing Think Up, a low-cost fashion range to accommodate customers struggling during the economic downturn.

It used to be the case that second-hand items were only good enough for those who couldn’t afford to buy new. The feeling of opening a crisp, shiny new book was something that many weren’t willing to trade for a cheaper price.