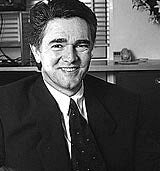 The UK advertising industry is in danger of losing its mantle as the most creative and innovative in the world, unless it goes all-out to promote its “creative star quality”, according to the new president of the Institute of Practitioners in Advertising (IPA), Bruce Haines.

Leagas Delaney chairman Haines began his two-year presidency this week by telling industry representatives at the IPA members’ lunch yesterday: “We have become far too defensive about what we do.

“[We are] so desperate to be seen as a ‘grown-up’ business that we have relegated persuasive facts about the UK ad industry – that it is the most innovative, exciting, sophisticated and creative in the world.”

He urged agencies to move away from treating advertising as “formulaic” and embrace innovation and creativity.

Making the promotion of “creative star quality” his mission, Haines said he intends to work with the Creative Directors’ Forum to identify ways to further involve creative people with the IPA.

Haines also welcomed news that the majority of companies are still raising their marketing spend rather than cutting back, despite a sharp drop in advertising revenues for media groups.

The IPA’s quarterly Bellwether report, published yesterday (Tuesday), showed that twice as many companies increased their marketing budgets as cut them in the first quarter of the year.

Haines has taken over from Rupert Howell, chairman of HHCL and Partners.