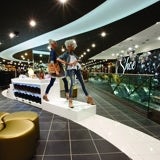 His appointment is said to reflect New Look’s plans to increase its brand-focussed marketing.

Cross was Selfridges marketing director until 2001 and is credited with leading the rebranding of the luxury department store in the 1990s.

He is currently a partner at consultancy firm The Foundation and was previously chief marketing officer of online bank Egg and an international planning director at advertising agency BBH.

Last week New Look reported a 4.5% drop in like for like sales and a 5% fall in profit for the six months to 25 September, blaming disruption from moving its head office to central London.

The retailer also warned that prices are set to rise in the face of increasing commodities costs.