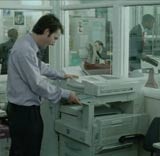 Abbot Mead Vickers.BBDO has created a new multi-media campaign to support the ‘Make Poverty History’, a network of charities and non-governmental organisations, which have combined resources to raise the issue of world poverty.

The aim is to put pressure on those countries attending the G8 summit (Canada, France, Germany, Italy, Japan, Russia, the UK and the US), due to take place in Scotland in July, and to get them to agree to increase the level of aid given to poor countries and to cancel their debts.

AMV has created three 30-second television executions that will run throughout the year. They each focus on a person who appears to be frustrated with a a temperamental photocopier machine, stuck jam-jar lid, or a supermarket queue, but who is in fact urging people to get angry about something that really matters – world poverty.

The TV campaign will be supported with posters driving people to a ‘Make Poverty History’ website, which encourages them to send an e-mail to Tony Blair and to wear a white band to show their commitment to the cause. Media has been planned and bought by PHD.