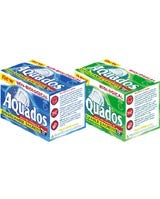 UK detergent manufacturers are planning yet another product “revolution”, with the launch of new “tea bag” style soap powder – loose detergent powder in a dissolvable sachet.

Both Procter &amp; Gamble and Unilever are understood to be considering launching versions of the product early next year.

According to a household goods buyer: “For consumers, the benefits of loose detergent powder in sachets is that it will dissolve quicker in the wash than liquid capsules or tablets.”

Early this year, both Unilever and P&G launched liquid capsules (MW February 1). Both household goods giants were beaten to the shelves by retailer the Co-op, which launched its own-branded liquid capsules, Brio Actipods.

Glasgow-based company Aquados has been testing its own washing detergent in a dissolvable sachet, also called Aquados, in Scotland since the summer. The company plans to roll out the product nationwide early next year.

An Aquados spokesman says: “We have patent rights for the format, so I will be surprised if our competitors launch something similar.”

Neither P&G nor Unilever would comment on the launch as Marketing Week went to press.