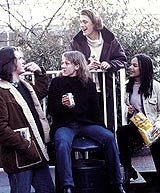 When it comes to launching products in the fashion, music or technology arenas, the importance of the youth market is widely recognised. Gaining credibility in the eyes of 15- to 24-year-olds has long been seen as key to the success of such products.

While the penetration of major technological innovations such as MP3 players shows that 15- to 24-year-olds do believe in updating their gadget portfolio to include the latest advances, new research from the ROAR Consortium, a youth research project, shows that not all young people are interested in being part of new trends or being influential by spreading the word about new products and services.

It is difficult to pinpoint exactly how new trends begin, and the proliferation of consumer media has made it even more difficult to find a single source for particular trends. In today’s market, it is more revealing to look at which consumers are picking up on new trends and which groups are the most influential when it comes to spreading the word.

The ROAR project, which is managed jointly by The Guardian and Observer, Channel 4, EMAP Advertising and OMD UK, and conducted by 2cv: Research, has been investigating the spread of trends among 15- to 24-year-olds over the past two years. Its research has found that there are three key groups within this demographic segment – the Opinion-formers, the WannaBs and the Mainstreams.

The Opinion-formers account for 12 per cent of 15- to 24-year-olds. Members of this group have a genuine passion for new technology and music and are prepared to actively seek out new products and sounds. The WannaBs make up a slightly larger group – 23 per cent. Members of this group describe themselves as trendsetters, but tend to pick up on new trends once they have been well aired in the media. Mainstreams are the largest group: 65 per cent of 15- to 24-year-olds fall into this category. This group lags well behind the other two groups in terms of taking up trends. Its members generally display less interest in trying out new gadgets or discovering new bands.

The ROAR research looked into the influence of members of these three groups on Adidas Miyage and Adidas Prajna trainers and the Sony Clie PDA, along with six emerging bands. It aimed to measure the impact of word-of-mouth recommendations as compared with media coverage and advertising. Awareness levels for these products and brands, along with those for a comprehensive list of competitor brands, was measured among equal numbers of respondents or “trend seeds” from the Opinion-formers, WannaBs and Mainstreams groups.

These “trend seeds” each supplied ROAR with details of ten of their friends, who were later given the same awareness-level interview. A goody bag containing the Adidas Miyage or Prajna trainers, a Sony Clie PDA and the six CDs was then sent to the original respondents, and ROAR interviewed their friendship groups again two to three months later. A control group of nationally representative 15- to 24-year-olds was also interviewed about the brands and bands, both before and after the planted products had been sent out.

The findings show that, unsurprisingly, the Opinion-formers’ friends demonstrated a higher level of awareness of the planted products than the friends of the WannaBs and Mainstreams. However, among the control sample, awareness levels for both the Adidas trainer brands increased naturally by 19 per cent between the pre- and post-experiment interviews.

Interestingly, the friends of the WannaBs failed to register the highest “plantation effect” for any of the products and artists, despite their claim to be the trendsetters within their peer group.

The Opinion-formers and their friends were the only group to register any plantation effect for the Sony Clie PDA. On the other hand, Mainstreams were keen to spread the word about the planted music, although the level of media interest in the artists and bands did have an impact in how interested the Mainstream trend seeds were.

On the whole, the Opinion- formers were much more likely to be aware of the smaller, less well-known artists they were asked about. They were also more likely to have heard of more of those artists tipped by key music industry figures (in pre-survey telephone interviews) as being the “next big thing”, than either the Mainstreams or the WannaBs.

The research supports the ROAR consortium’s initial data on the segmentation in the 15- to 24-year-old market. Marketers would be well advised to target the Opinion-formers early in a product launch, through tactical and ambient campaigns. Momentum and, crucially, sales of the product can then be built by targeting the WannaBs and Mainstreams with more traditional PR and advertising.