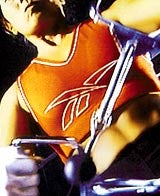 Reebok has already announced the US launch of footwear and clothing – and new advertising – aimed at women. The company has also launched a website for women that features the new ranges, as well as a number of promotions.

A company spokeswoman says: “This aggressive initiative includes plans to unveil additional components to new product launches and advertising. We are planning to develop ways to showcase these products to women.”

She did not reveal whether the “showcase” will include standalone Reebok stores exclusively aimed at women. The company is to open its first standalone European retail store on October 18 at the Bluewater shopping centre in Kent.

Nike has announced the launch of maternity range Liz Lang-Nike. A joint venture with US-based designer Liz Lang, it will target “fitness-focused mums-to-be” and go on sale next year (MW September 13).