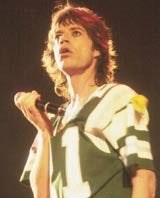 Mick Jagger turned 60 in July but shows no signs of slowing down, having completed a gruelling world tour with the Rolling Stones this year. However, while the sexagenarian rocker and his peers created the template for youth culture that rules the modern world, all too often the over-50s are overlooked by society.

Marketers and advertisers seem slow to realise that consumers reaching their 50s are a generation radically different to their predecessors and should not be treated as cursory stereotypes of old age.

Age Concern England, the UK’s largest charity for the elderly, has recognised this shift and is embarking on an ambitious project to set up a “membership” body for the over-50s. BMP DDB was appointed as advertising agency to the project, Conran Design Group has been briefed to work on its visual identity and a £12m budget earmarked for the launch (MW last week).

Effectively, the body will act as a trade union for the over-50s and host a clutch of commercial ventures targeting them. Until now, Age Concern has primarily campaigned on behalf of and offered support services for the over-70s.

Age Concern is taking as its template the AARP, formerly the American Association of Retired Persons. This US body has 35 million members and considerable clout when it lobbies government on issues close to its heart.

The demographic shift taking place in the UK is well documented: according to Mintel, the country will have 13.7 million people in their 50s and 60s by 2006, 2 million more than a decade earlier. In three years, 27 per cent of all adults will be in this age group. People of this generation will expect to change the way they participate in society as they have done throughout their lives.

However, he says the project will be defined by its charitable values: offering products to the over-50s where there is market failure, for instance home insurance products that recognise the financial status and particular needs of the 50-plus age group.

It is this overriding charitable objective, he says, that will differentiate the organisation from the purely commercial objectives of Saga, which pioneered marketing to the over-50s in the past decade.

Churchill notes a burgeoning interest in the subject over the past year. “Advertisers, rather than marketing professionals, have been slow to appreciate the importance of the over-50s,” he claims.

Age Concern’s template, the AARP, is funded by membership fees of $12.50 (£7.50) a year. Income is also generated from deals with third parties for the services and products the association offers. AARP director of international affairs Nancy Lea Mond says its model, combining advocacy with commercial ventures, is being emulated around the world, from Denmark to Korea and Ukraine.

The AARP influences marketing to the over-50s by making companies aware of the market it represents and it is prepared to make the occasional critical intervention. AARP spokesman Tom Otwell says: “When television ads portray over-50s in a derisively stereotypical way, we point out to them that it is not a good idea. There is some evidence Madison Avenue thinks that 18 to 34 is the priority market. But marketers need to be more savvy.”

The power the AARP now wields means that companies are eager to become partners and it offers a wide array of products and services including discounted air travel, shopping. holidays, cars, business services and computers. Some of the brands involved, such as Virgin Atlantic and Reebok, have ostensibly youthful images.

Age Concern says it has already opened negotiations with a number of companies interested in its latest project. One company showing interest is financial services giant Prudential. Director of brand and customer insight Angus Maciver says the Pru devotes most of its energies to thinking about how to market to the over-50s and conducts monthly focus groups. “They don’t like marketing spin,” he says, adding that Prudential chose poetry as theme in its Plan from the Pru campaign because it avoids the glitzy approach that older people find off-putting.

One of the major problems affecting the way companies approach the over-50s is that the age group has little representation in the marketing and advertising sector, says Ogilvy &amp; Mather executive planning director Mark Earls. “Psychological distance is hardest. Most people want to sell to people like ‘us’. There is an element of truth in the old statement that we advertisers make advertising for ourselves.”

A common misconception is that the over-50s are settled in their choices. “It is a big mistake to confuse habit with loyalty,” says Chris Mitchell, director of specialist agency Senioragency. “A lot of over-50s have a live for today, ‘just do it’ attitude that makes them very easy to market to.” He points out that despite the improved editorial, Saga’s magazine still attracts stereotypical “Stannah chair lift” advertising.

Walsh Trott Chick Smith planning partner Murray Chick observes that one of the most important lessons in marketing to the over-50s is not to let people feel they are being put in that category. He also observes: “A lot of Sixties idealism has been kept under the surface, and now that they are affluent they have a conscience that needs easing.”

Initiative international research director Nick Hiddleston, half way through a research project into the over-50s, agrees. He says: “Through their protesting in the Sixties and more recently with their support of organic produce and their protests against GM crops, this is a generation receptive to new ideas – if advertisers communicate with them intelligently and with respect.”

Chick suggests there is room for a “Saga cool”. Whether Age Concern’s project will achieve that is doubtful, but it will almost certainly give rise to a new kind of relationship between commercial activity and political advocacy.