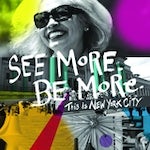 NYC & Company, the City of New York’s marketing and tourism body, will be hoping the campaign provides a further boost to tourism after recent evidence suggested that visitor numbers are on the up this year after a recession hit 2009.

The campaign seeks to inspire “a sense of optimism for future visits” by pushing the “the energy, diversity and passion of the city”. It highlights all five of the City’s boroughs – Manhattan, Bronx, Queens, Brooklyn and Staten Island – and the different holiday experiences available including family, gay and shopping breaks.

Willy Wong, chief creative officer at NYC & Company, says the campaign, which uses the strapline See More, Be More. This is New York City” aims to “evoke the excitement of one’s first experience in the City”; adding the body wants visitors to “reflect on the feeling of personal transformation that lingers long after a trip to NYC ends.”

Recent data suggests that despite the lingering recession and a strong Euro buying fewer dollars, visitor numbers are on the up. PKF Consulting recently said that hotels in Manhattan were about 90% full in May.

NYC & Company has agreed deals with several corporate partners to entice visitors. For example, American Express customers could get double membership reward points at 500 locations citywide if they register this summer, while American Airlines are offering “roundtrip sweepstakes” and flight deals.