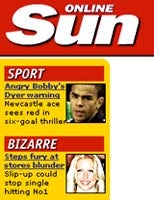 News Group, which owns The Sun and News of the World, is reviewing the future of its online properties including Page3.com and Supergoals.com.

The group is looking at integrating the two sites more closely with thesun.co.uk.

One industry insider says: “The two sub-brands are certainly being monitored and looked at.”

But some industry insiders are even doubting the future viability of the two sub-brands.

Another says: “I think Supergoals is being incorporated into thesun.co.uk.” The review follows moves by rival newspaper groups to cut back on online investment.

The company was reportedly facing a projected annual loss of &£8m from the four sites. It put more than 40 staff working on the sites on notice of redundancy.

Stockbroker Seymour Pierce later bought the sites for a nominal &£1 in the hope of selling them on as going concerns. If no sale is forthcoming, it will place them in ‘hibernation’.