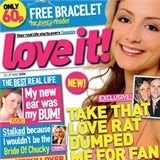 News Magazines is launching a voucher subscription service for readers of women’s real life weekly Love It! – providing a 20% discount on the cover price and exclusive special offers.

Readers of Love It!, which launched in January, will be able to send off for vouchers that can be redeemed at newsagents.

The scheme will give the title a unique “cut through” in its sector – subscriptions for weekly titles are rare, as they generally run at a loss.

A News Magazines spokeswoman says the voucher system, which launches as a test in June before rolling out, will also offer exclusive offers, all at half price for every subscriber.

Love It! has also launched a classified ads section this week. The section, which News Magazines commercial director Karl Marsden estimates could bring in &£250,000 per year, was planned for the run-up to Christmas, but has been brought forward .