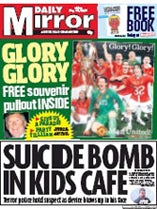 Newspaper publishers are continuing massive cost cutting measures with more jobs expected to be axed. It is understood that staff at Trinity Mirror and Telegraph Media Group are among the latest to be put on notice.

Trinity Mirror is looking to make voluntary redundancies at its Scottish titles The Daily Record and the Sunday Mail. It could involve up to 35 staff.

TMG is also understood to have put several staff on notice and is expected to make cuts, though it is not known which departments they will come from.

The publisher recently restructured its marketing department in a bid to “streamline operations”. It has already scrapped the marketing director role, leading to the departure of Barry Flanigan, and the role of general manager of digital, held by Mike Moore (MW October 16).

Meanwhile, Independent News & Media announced plans to cut 90 jobs last Tuesday (November 18) and it is now understood that there will be losses in its classifieds and display advertising teams.

In October, The Financial Times announced that it would also be axing a number of jobs, which is also expected to include its sales and marketing departments. Up to 60 positions are expected to be made redundant.

The newspaper industry has been hit hard by the advertising downturn. The industry wide cost cutting measures have been made in the face of rising printing costs and the worsening global economic environment.