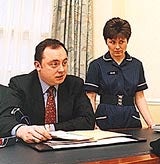 The Department of Health (DoH) is seeking an advertising agency to create an international campaign to entice foreign doctors to work for the National Health Service.

The month-long campaign will target doctors in seven European countries – Denmark, Finland, Germany, Greece, Holland, Sweden and Switzerland – as well as the US, Canada, Australia, New Zealand and the Middle East.

Ads will appear in medical and specialist magazines in these countries from September in the hope of recruiting up to 1,000 consultants and GPs.

This week the DoH is expected to ask COI Communications to organise a pitch to appoint an agency to handle the campaign.

Ministers have been forced to recruit from overseas after realising they will be unable to train enough medical students to fulfil the Government’s pledge of providing 10,000 new doctors by 2005.

In a statement, the DoH says: “The biggest constraint the NHS faces today is no longer a shortage of financial resources, it is a shortage of human resources.” The statement adds that the campaign aims to recruit NHS staff from developed countries where there is “a surplus of trained doctors”.

The NHS already recruits nurses from overseas because of local shortages. An estimated 30,000 foreigners working in hospitals around the country.

The Royal College of Nursing said earlier this year that the number of nurses from overseas working in the UK was poised to overtake the number of newly qualified homegrown nurses.