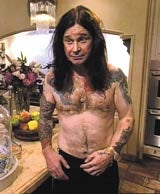 Golden Wonder’s Nik Naks brand is to sponsor the UK premiere of The Osbournes on MTV.

The ten-part fly-on-the-wall documentary, which follows the bizarre antics of UK rock star Ozzy Osbourne and his family at their US home, was due to air on Sunday at 9pm.

But it is understood that the launch date for the first series in the UK could be put back because of outstanding contractual negotiations between the Osbourne family and Viacom-owned MTV over the rights to a second series.

The documentary has been a huge hit in the US and President Bush was so taken with the show that he invited Ozzy, the former singer with rock band Black Sabbath, to dine with him at the White House.

The Nik Naks sponsorship was negotiated by Starcom Motive and Viacom Brand Solutions.

A spokeswoman for Viacom Brand Solutions was unable to confirm the UK broadcast date as Marketing Week went to press because of “negotiations with the US and the Osbournes concerning a second series”.

The family reportedly wants a second series to include footage of them in their UK home.

TV industry experts are predicting that the show will be the next TV programme brand to be a big hit with consumers, following in the footsteps of Channel 4’s Big Brother and ITV’s Pop Idol.