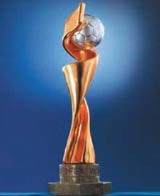 Sports goods maker Nike is locked in a legal battle with football governing body FIFA over alleged attempts to ambush this year’s women’s football World Cup, which is being held in the US.

Because Adidas has signed as FIFA’s official sportswear partners, the organisation is keen to stop Nike from taking control of the tournament. Nike was widely regarded as having eclipsed Adidas during last year’s football World Cup in Japan and Korea.

Nike has filed a legal challenge to FIFA over the right to use “USA 2003” in its advertising around the competition in response to a letter sent by FIFA, warning that it would take action against ambush attempts at the competition.

The letter said that FIFA had successfully defended rights to “France 98”, “Korea/Japan 2002” and “Germany 2006”. It warned Nike off falsely advertising to consumers by misrepresenting itself as an official sponsor.

A FIFA spokesman says: “Nike has filed a complaint that lawyers are looking at. We are aware of certain ambush activities and have notified the companies, but have no comment on any future legal action.”

Nike has been a prominent supporter of women’s football in the US, where the game draws a much larger following than in the UK. The company sponsors the US women’s football team, the domestic cup competition and various training programmes.