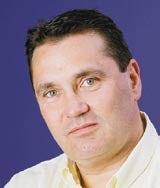 Nintendo has appointed David Yarnton to its top marketing role as it readies itself for a make-or-beak Christmas push behind GameCube.

Yarnton, previously Nintendo director of sales and marketing for Australia, New Zealand and the Pacific Islands, has been appointed general manager for the Japanese games company.

He replaces Andy Williams, who left in June to become vice-president and general manager at MGM Home Entertainment for the UK and Ireland. Yarnton will report to managing director of Nintendo Europe David Gosen.

Gosen says: “2004 will be a pivotal year for Nintendo and Yarnton will be instrumental in taking the UK market from strength to strength.”

Yarnton will oversee the £8m Christmas drive behind Nintendo’s GameCube next month. The company will slash the price of the GameCube to £79 from £129 next week in an attempt to boost sales. The price reduction will make GameCube considerably cheaper than Microsoft’s Xbox, at £129, and Sony’s PlayStation 2, which was reduced from £169.99 to £139.99 last week.

The price cut follows news of the company’s first financial loss in its 40 years as a publicly listed company. Analysts blame the results partly on poor sales of the GameCube.

Yarnton will also be responsible for fighting off competition in the hand-held gaming market, where Nintendo’s best-selling GameBoy Advance will face the multi-million pound launch of Nokia’s N-Gage mobile phone and gaming console.