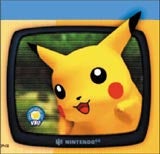 Computer games giant Nintendo is expected to roll out PokÃ©mon Centre stores in London within a year, selling merchandise related to the blockbuster kids’ TV and movie cartoon.

The move is designed to build the PokÃ©mon animated characters into a major brand which can challenge Walt Disney characters. There are also plans to develop similar stores in New York.

Nintendo has already opened a similar store in Japan, which sells everything from PokÃ©mon console games to coffee mugs and chocolate-making machines.

A company spokeswoman says: “There are plans to open PokÃ©mon stores in London and New York but it is unclear exactly when that will happen.”

The PokÃ©mon trading cards game, a craze among school children, is owned by Hasbro, which bought card game maker Wizards of the Coast in 1999.

The characters were launched, initially as a computer game, in 1996. It spawned a craze which has led to a feature film, a TV series and countless spin-off products.

Jeremy Dale, commercial and marketing director at Nintendo’s UK distributor, THE Games, left in May this year. Dale was responsible for the roll-out of PokÃ©mon games in the UK.

Early this year, Nintendo rationalised the global management of merchandising copyrights related to PokÃ©mon, in order to control use and promotion of the characters.